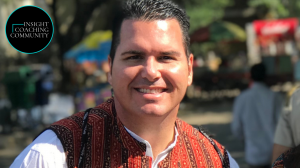 LOS ANGELES, CA, UNITED STATES, July 28, 2021 /EINPresswire.com/ — Life Coach, John Strasser, along with several members of the Insight Coaching Community are coming together to create "Listen", a public experience and expression of love. They are dedicated to making an impact on the world and in their community by bringing the powerful philosophies of life coaching into the public sphere.

In a world where everyone has a voice, few people listen. Strasser and his Community of Coaches are offering people the opportunity to be heard. "Listening is loving," says Strasser, "and this public experience will take place Monday, September 6, 2020 – Labor Day. 11:00 to 1pm. As Insight Coaches, we listen for understanding rather than agreement, with Present Moment Awareness."

It’s a complete focus on every aspect of the conversation in the moment without allowing any outside distraction to hold space. J. Krishnamurti, the Indian philosopher, often said that to help someone with a problem, all you have to do is understand it without judgment and see it clearly. In time this understanding will be transmitted to the person with the problem.

"To listen fully means to pay close attention to what is being said beneath the words. You listen not only to the 'music,' but to the essence of the person speaking. You listen not only for what someone knows, but for what he or she is. Ears operate at the speed of sound, which is far slower than the speed of light the eyes take in. Generative listening is the art of developing deeper silences in yourself, so you can slow your mind's hearing to your ears' natural speed, and hear beneath the words to their meaning." Peter Senge

“We were all given two ears and one mouth for a reason.” ~Greek Philosopher Zeno

John Strasser is widely regarded as one of the world’s preeminent master life coaches and coaching instructors. He has coached more than 3000 hours and created a multitude of coaching programs, events, and experiences. He has studied under some of the world’s most successful coaches, including Steve Chandler, known as “The Godfather of Coaching” and co-author of The Prosperous Coach book. He has dedicated his life to volunteer work, serving on Marianne Williamson’s team in New York for two years and spending another three years speaking to inmates weekly at Rikers Island prison. Born with a yearning for spirituality, John has lived and studied in India and been back to the subcontinent thirteen times. Indian street food and overnight trains are his passion.