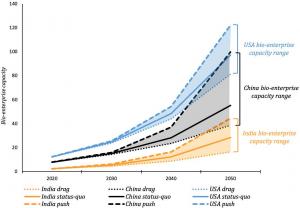 By 2050, with aggressive and sustained government intervention by China—a policy push—China could overtake the U.S.”
— Robert Friedman, Ph.D.

LA JOLLA, CA, UNITED STATES, July 28, 2021 /EINPresswire.com/ — The J. Craig Venter Institute (JCVI) Policy Center has released a summary version of their report outlining the competitive landscape of biotechnology through 2050. The report uses nearly 100 indicators to build scoring around a nation’s capacity and potential to invent and produce biotechnology products over time. While they forecast that the United States will continue to lead the world in biotechnology ahead of China, it is by no means assured.

“By 2050, with aggressive and sustained government intervention by China—a policy push—China could overtake the U.S., if the U.S. stance towards its bio-enterprise remains about the same as it does today,” stated Robert Friedman, Ph.D., senior author and JCVI VP for policy and university relations. He went on to say, “It is clear that if the U.S. wants to retain leadership status in biotechnology it will require sustained governmental investment and focused policy decisions.”

The 12 countries examined in the report include, first, the United States and China, the world’s two largest economies and biotechnology leaders on an absolute basis today. In addition, it includes four high-income countries (using the World Bank classification scheme): Germany, South Korea, Singapore, and Israel. All four are biotechnology leaders from a different perspective, not in absolute ca¬pacity, but the intensity of their biotech sectors. Four of the countries are large, rapidly expanding economies with ac¬tive biotechnology sectors: India, Brazil, South Africa, and Indonesia. Finally, included are two U.S. adversaries: Russia and Iran. The latter six are all middle-income countries today.

While the five highest-income countries on a per capita basis—Israel, Singapore, the U.S., Germany, and South Korea—have the highest bio-enterprise innovation-driver scores, the U.S. and China are the clear current bio-enterprise leaders as their capacity far outstrips other countries.

In the case of the U.S., even though its GDP (measured as purchasing power) is about three-quarters the size of China’s (due to China’s far larger pop¬ulation), the US’ bio-enterprise capacity score is over fifty percent larger. However, China’s authoritarian government has the potential to more rapidly implement policy changes than the U.S. and other democratic countries, giving them the ability to close the gap or overtake the U.S. leadership position.

The 100 indicators used to formulate the bio-enterprise scoring are broken down into three categories: biotechnology, science and technology, and general societal. Among biotechnology indicators are publications, companies, talent, universities, policy, and industry maturity. The science and technology category includes a similar pool of markers. The general societal category indicators include current and predicted states of the economy and population, education, and attitudes towards science.

Both the complete and summary versions of the report, “Biotechnology by Mid-Century: Assessing current capabilities. Anticipating tomorrow’s leaders. A 12-country comparison.,” may be downloaded at https://www.jcvi.org/Biotech-MidCentury.

The J. Craig Venter Institute (JCVI) is a not-for-profit research institute in Rockville, Maryland and La Jolla, California. dedicated to the advancement of the science of genomics; the understanding of its implications for society; and communication of those results to the scientific community, the public, and policymakers. Founded by J. Craig Venter, Ph.D., the JCVI is home to approximately 150 scientists and staff with expertise in human and evolutionary biology, genetics, bioinformatics/informatics, information technology, high-throughput DNA sequencing, genomic and environmental policy research, and public education in science and science policy. The JCVI is a 501(c)(3) organization. For additional information, please visit www.JCVI.org.