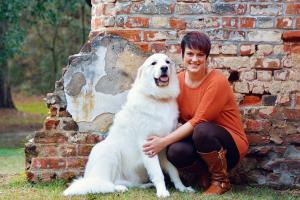 RICHMOND HILL, GEORGIA, BRYAN, May 10, 2021 /EINPresswire.com/ — Britnee Kinard had a high profile career in business before dedicating herself to caring and advocating for wounded veterans.

Britnee is President and Founder of SD Gunner Fund which was established in June 2014 to assist veterans, children with disabilities and first responders while inspiring disability awareness through public education and advocacy. In 2005 Britnee’s husband, Hamilton, was hit by an IED while serving in Iraq and suffered many traumatic injuries including Complete Nerve Damage, Cortical Blindness, and a Severe Traumatic Brain Injury.

Britnee Kinard, a Lincoln Award Winner and often seen as one of the most influential disabled veteran caregivers in the coastal southeastern United States, has been recognized by Georgia Senator’s Hill of the 4th, Hill of the 6th, Dugan of the 30th and Harbison of the 15th in Georgia Senate Resolution 475 for her work with veterans and caregivers. She has also been recognized by Georgia Congressman Rick Allen, Georgia Governor Nathan Deal, and Chairman of the Senate Committee on Veterans Affairs Johnny Isakson for her work with Veterans. Kinard is noted for her signature role in getting one of the first mobility service dog’s approved through the Department of Veterans Affairs in the Southeast Region. It just so happens that the service dog was her husband’s.

Kinard is listed in the Who’s Who of Distinguished Alumni and was honored by her alumni with the MTSU True Blue Distinction Award for her work with veterans and caregivers. Her accomplishments have been published in the United States by People Magazine (exclusive), Good House Keeping Magazine (online), The Today Show (online), Mississippi Magazine, Oxford Invitation, Pilot Club International Magazine, Military Order of the Purple Heart Magazine, and many others. Her work has also been published in the UK by the Daily Mail and Britain Weekly, and in Australia as well as Holland.

Building on the success of her nonprofit, the SD Gunner Fund, Britnee Kinard continues to advocate and educate on behalf of all legitimate service dog handlers by offering a new program that helps businesses combat fake service dogs and emotional support animals. In the US, there are an estimated 500,000 service animals working for those with disabilities, but it is also estimated that 80% of service animal interactions at businesses are fake — making the need for education and advocacy ripe.

Kinard’s advocacy program is offered nationwide and has already been successful in the real estate, property rental, and small business markets.
Kinard’s program is aimed at educating businesses of their legal rights with Service Animals under the Adults with Disabilities Act (ADA), Housing of Urban Development (HUD) and the Fair Housing Act; helping businesses advocate for not only their business rights, but also the rights of legitimate service dog handlers; and reducing discrimination liabilities.

“My mission is to not only educate and advocate for legitimate service dog handlers, but to also stand up for businesses and give them the tools they need to not only protect their business but also not get taken advantage of by fake service dogs. Service Dogs that are not properly trained can cause damage to not only your business but also your customers, both of which can cause an undue financial burden on the business owner. This can all be avoided if the business owner is given the tools and support they need,” says Kinard.

To learn more about Britnee Kinard's advocacy program or for booking information, Britnee can be contacted at: