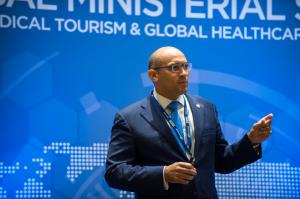 Today, we are in a race against time to safeguard the $24 trillion asset value of the ocean for this and future generations by dedicating 30% of the ocean as replenishment zones by 2030. ”
— Dr Angus Friday

SAN DIEGO, CALIFORNIA, USA, October 23, 2020 /EINPresswire.com/ — Dr. Angus Friday, an accomplished blue economy leader and practitioner, has joined the Waitt Institute as its Blue Economy Director. Angus brings a wealth of experience to the team, having served as the World Bank’s Ocean Representative and having worked with the Dutch Government and FAO in establishing the Global Blue Growth Network. Dr. Friday also played a leading role in developing the Blue Grenada Program which included the development of a Blue Growth Master Plan and the establishment of the Blue Innovation Institute; all of which contributed to the World Bank’s “First Fiscal Resilience and Blue Growth Development Policy Credit” with $30 million in concessional financing for Grenada under IDA-18.

Dr Angus Friday stated: “It is an honor to be selected by Mr. Waitt and his colleagues at the Waitt Institute whose outstanding work on the ocean is highly regarded by ocean leaders and practitioners the world over. Today, we are in a race against time to safeguard the $24 trillion asset value of the ocean for this and future generations by dedicating 30% of the ocean as replenishment zones by 2030. Time is of the essence as presidents and prime ministers of island and coastal nations seek solutions for counteracting job losses in tourism and other sectors as a result of the COVID pandemic.”

Dr. Friday begins his time with the Waitt Institute at a critical juncture, as island nations and coastal communities address the negative effects of COVID-19 that have impacted tourism, shipping and fisheries industries around the world. Before the pandemic, the Ocean Economy (industries taking place in or related to the ocean and freshwater bodies), was projected to grow at double the rate of terrestrial industries by 2030. Now, that rate of growth means even more as nations begin to rebuild. The potential relief from fast-growing ocean industries could be a huge boon to recovery efforts, if communities can grow in a sustainable way.

“We are thrilled that Dr. Friday is joining us. With his leadership, the Waitt Institute will expand its portfolio beyond existing programs in marine spatial planning, marine protected areas, and sustainable fisheries to also help nations design sustainable blue economies. Combined these efforts will support long-term ocean and community health and well-being,” said Dr Kathryn Mengerink, Executive Director of the Waitt Institute.

In 2017, Dr. Friday played instrumental roles in helping Caribbean Governments to establish the Caribbean Climate Smart Accelerator to which the InterAmerican Development Bank pledged $1 billion in co-financing. In working with the Green Climate Fund and New York University, he helped develop the first phase of St. George’s establishment as the region’s first Climate Smart Capital City.

At the World Bank, Dr. Friday helped to establish a $30 million trust fund for renewable energy in small island developing states and he continues to provide pro-bono advice to the Government of Grenada on matters related to economic development and fiscal governance. As a diplomat, he served as Grenada’s Ambassador to the United States, Mexico and Canada and also as Grenada’s Ambassador to the United Nations, where he was selected as chairman of the Alliance of Small Island States (AOSIS), a climate negotiating bloc of 44 small island developing states.

A qualified medical doctor with an MBA, Dr. Friday brings a wide perspective on the interconnected nature of business, health, and international economic policy. He is a certified Yacht Skipper and SCUBA Diver, a keen cyclist and dabbles in oil painting when time permits. Dr. Friday is based in Grenada with his fiancé and their three daughters.

The Waitt Institute creates and implements sustainable ocean plans in partnership with committed governments and local stakeholders. They currently have partnerships with the governments of the Azores, Barbuda, Bermuda, Curaçao, the Federated States of Micronesia, the Maldives, and Tonga. The Waitt Institute is a founding member and the organizing body of the Blue Prosperity Coalition, a network of NGO’s, academic institutions, foundations, and other organizations working together to assist committed governments to protect the environment and improve the economy at the same time. Founding members include the Waitt Institute, National Geographic’s Pristine Seas, Oceans 5, Ocean Unite, Dynamic Planet and the Waitt Foundation.