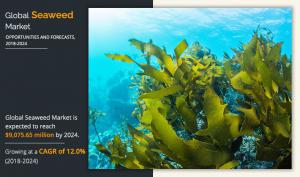 PORTLAND, OR, UNITED STATES, September 22, 2020 /EINPresswire.com/ — According to a new report published by Allied Market Research, titled, Seaweed Market by Product and Application: Global Opportunity Analysis and Industry Forecast, 2018-2024 the global seaweed market size was valued at $4,097.93 million in 2017, and is projected to reach $9,075.65 million by 2024, registering a CAGR of 12.0% from 2018 to 2024. In 2017, the red seaweed accounted for more than eight-ninths share of the global seaweed market, in terms of value.

Seaweed, also called as macro-algae, belongs to several species of macroscopic, multicellular, marine algae. It is classified into three broad groups based on pigmentation, which include red, brown, and green seaweed. The major utilization of these seaweeds as food and food ingredients is in Asia-Pacific, particularly in China, Indonesia, Philippines, Korea, and Japan where seaweed cultivation has developed into a huge industry. Seaweed farming is becoming an increasingly competitive market for food and related products across the globe.

Comprehensive outlook and valuable analysis on how the COVID-19 impacts the Seaweed Market @ https://www.alliedmarketresearch.com/request-sample/4650

Substances that are extracted from seaweeds such as hydrocolloids make up most of the remaining market share, while smaller application such as fertilizers, animal feed additives, aquaculture, biomass for fuel, and wastewater treatment make up the rest. Increase in demand for seaweeds in the manufacture of hydrocolloids, such as agar, alginate, and carrageenan, is anticipated to boost the demand for seaweeds in during the forecast period. Agar, alginate, and carrageenans are premium seaweed hydrocolloids, which are used as gelation and thickening agents in different food, pharmaceutical, and biotechnological applications. Hydrocolloid polysaccharides have significant importance, both technologically and economically, since they are used in the food, pharmaceutical, medicinal, and biotechnological industries, due to their distinct physicochemical properties.

Companies worldwide are focusing their R&D efforts on technological innovations to expand the functionalities as well as applications of various types of hydrocolloids across several end-user industries. For instance, in 2017, Cargill Inc. launched Seabrid, a new and innovative type of carrageenan extract of seaweed as thickening agent to give firmness, creaminess, and body to wide range of gelled dairy dessert formulation such as flan, custard, and crme caramel.

Seaweeds are being extensively explored as a fuel, due to their high photosynthetic efficiency and their ability to produce lipids, a biodiesel feedstock which is anticipated to open new avenues for the seaweed manufacturers. Moreover, high untapped market potential in North America and Europe is expected to boost the seaweed market during the forecast period. However, unfavorable climatic conditions and fluctuation in the prices is expected to hamper the seaweed market growth. The seaweed farming industry has developed in some countries of In North America and Europe, unlike Asia-Pacific, where it is still in its nascent stage. In the recent years, the European policies have driven the development of seaweed cultivation as part of the European Unions Blue Growth initiative. In support to this initiative, the countries across Europe are providing subsidies to study the possible applications of seaweeds across various end-use industries. Moreover, interest in seaweed cultivation has been peaking in recent years in North America, owing to its nutritional value as well as its richness in iron and protein content. Various innovative techniques such as the vertical or 3D farming are adopted by the seaweed farmers using the water column to grow seaweeds. Thus, all these factors together are anticipated to provide potential growth opportunities for the market during the forecast period.

Purchase Enquiry on This Report: https://www.alliedmarketresearch.com/purchase-enquiry/4650

Red seaweeds are the largest and most abundant of the seaweeds, and thus hold a dominant position in the global seaweed market. Furthermore, they have an economically important role throughout Asia-Pacific, due to the presence of phycocolloids such as carrageenan. The carrageenan produced from seaweed has a variety of applications in food production as a thickener and stabilizer. Thus, higher consumption of red seaweed in the food industry is anticipated to drive the seaweed market growth. In addition to this, the human food application segment held the highest market share in 2017, as seaweeds are used in many maritime countries across the globe as a source of human food. Moreover, the major utilization of these seaweeds as food and food ingredients is in Asia-Pacific, particularly in China, Indonesia, Philippines, Korea, and Japan where seaweed cultivation has developed into a huge industry.