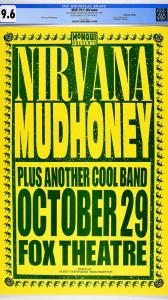 This Nirvana concert poster is now up for auction at www.ConcertPosterGallery.com

BALTIMORE, MARYLAND, USA, May 26, 2020 /EINPresswire.com/ — Psychedelic Art Exchange is auctioning the legendary Ultrasounds Collection, the most extensive and finest quality collection of Pacific Northwest concert posters ever assembled. The posters in the Ultrasounds Collection were issued from the late 1970’s through the early 2000’s, with the bulk of the collection focused on the highly coveted and historically important period of 1985 – 1995.

"Ever since news leaked out that we are auctioning the Ultrasounds Collection, our phones have been ringing off the hook," stated Glen Trosch, President of Psychedelic Art Exchange. "This collection features all of the historically important bands of the era including Nirvana, Pearl Jam, Soundgarden, Alice in Chains, The Ramones, and countless others."

Many of the posters in the collection were designed by the legendary concert poster artist, Mike King. King is widely considered to be the most prolific poster artist in the history of the United States, having created over 6000 posters. In addition to concert posters, King has designed album covers for major bands such as Ben Harper, Jack Johnson, Elliot Smith, and others.

"Historically important bands are a crucial first ingredient, but it’s the insanely great art that appears on these concert posters that make them so irresistible to collectors," explained Trosch. "Like the most popular artworks by Andy Warhol, King produced super smart work that brilliantly references Popular Culture."

The concert posters in the Ultrasounds Collection were created in tiny quantities, often less than 500. These low issue numbers, combined with the daily humidity and rain in the region, resulted in very low survival rates in undamaged condition. The Ultrasounds Collection represents the first chance for many collectors to acquire these posters in Museum Quality condition.

"All of the posters in our auction have been independently authenticated and graded by CGC, the leading third party authenticator of collectibles," added Trosch. "Collectors are excited because these are the very first posters from this era to be evaluated by CGC, and they have been preserved in pristine condition."

The auction is now open for bidding and ends Thursday, June 4, at 9:00pm ET. In order to give everyone a fair chance, all lots are being auctioned unreserved, and have a starting bid of just one dollar.

To view the auction, go to www.ConcertPosterGallery.com