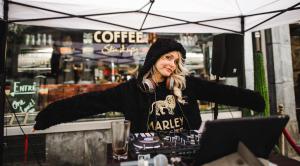 GOTHENBURG, VASTRA GOTALAND, SWEDEN, May 26, 2020 /EINPresswire.com/ — Swedish music producer sat down for a Q&A with us about why she’s using the Telos-powered music app Zeptagram to monetize her art, the music business in general, COVID-19, and that Game of Thrones ending, of course.

Veteran musician Melisha Linnell recently began auctioning partial rights to some of her songs on Zeptagram. In doing so, she’s helping to pioneer a whole new revenue model for musicians, who can use the Telos-powered dapp as an alternative to traditional middleman-heavy business streams like royalties and live gigs.
In the Q&A below, we explore why Melisha has turned to Zeptagram, and how her experience with blockchain has gone so far.
Melisha spoke to Telos Foundation content producer Peter A. McKay from her hometown Gothenburg, Sweden, where she has a recording studio at Brewhouse, an industrial space that’s been converted into a “culture factory” to host concerts and other events. She previously earned a bachelor’s degree in music production from University of Dalarna. She also teaches music production, mixing and mastering at the Academy of Music and Drama in Gothenburg.
Recently Melisha started working with manager Peter Swartling and is now working on her new EDM/pop album featuring many exciting artists.
In 2019, Melisha released two songs as part of a fan art project called ”Dragon Mother,” based on Game of Thrones.
She also recently started producing songs to a project called SheTrance with artist Nadja Itäsaari. And she is co-founder of an nonprofit called EQLovesMusic, which runs projects in music production and gender equality.

Read the whole interview at: https://medium.com/telos-foundation/catching-up-with-dj-melisha-1fc7ff16bdc1