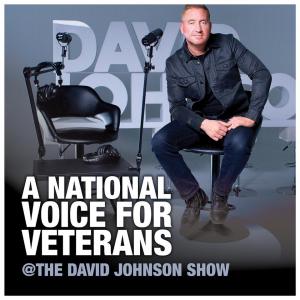 The David Johnson Show is the National Voice of Veterans

PHOENIX, ARIZONA, UNITED STATES, May 25, 2020 /EINPresswire.com/ — Memorial Day (May 25) is the time to recognize and remember the men and women who have died in military service for the United States. And we normally do that with parades, ceremonies and celebrations across our great country.

But this year is different, and we have to adjust to remembering our military heroes. To fill the void, there’s a streaming TV show for post 9-11-era veterans and military enthusiasts that fits the bill. It’s the “The David Johnson Show”, a new online talk show giving a voice to and highlighting the works of post 9/11-era veterans. The show launched in April, 2020, and early episodes are available to view on YouTube.

“The David Johnson Show” is a national voice for veterans that talks about points of interest in the American military and veteran subculture. Host David Johnson (lifelong AZ resident) interviews military-connected guests to hear them share their stories (often in a raw and emotional way) and introduce new perspectives to the veteran community. These stories are not normal news stories and are not happening on a regular basis, but should and need to be told.

Just as each previous military generation had their stories, topics, and issues – like the WWII veterans and Vietnam War veterans – post-9/11-era veterans also have their own culture, community, and camaraderie. The David Johnson Show gives a wide voice to these veterans and their stories. In addition to the show, we will be launching an initiative called Veteran Forward around Veteran’s Day 2020.

Episodes of the veteran podcast showcase a different guest from all different branches of the military. The hope for “The David Johnson Show” is that everyone who listens and watches the show will find something impactful from it that hits home for them. “We can all grow together by opening our minds and remaining open to new ideas. If you can hear one thing in one show that makes you ask yourself a different question, that opens up a new path in your life, then I feel that’s a success.” Johnson said.

Each video podcast episode of “The David Johnson Show” features a different guest showcasing their story. Early guests have included Retired Navy SEAL Craig Sawyer, 20-yr. military leader Keith Caraway, decorated war hero Jerry Peterson and others. Each of the guests uses principles learned in their business and often in their military career to enact change in their communities. Episodes will also focus on people who are making a difference in the lives of our veterans.

Each episode is available for streaming on your preferred device. Learn more and subscribe to TDJS story video podcast and newsletter at https://thedavidjohnsonshow.com.

Show host David Johnson
David Johnson served in the U.S. Army from 2000 – 2006 and completed three tours to Iraq under Operation Iraqi Freedom (OIF) I, II and III. His mission now is to tell the stories of the military and veteran culture from the people who lived it, for the people who believe in it.

“The David Johnson Show” is produced by Promotion Board Media, and is the first of several new online video shows planned for the military and veteran community. These shows will be professionally produced, present great information and offer a wide range of related content. Learn more and subscribe to TDJS story video podcast and newsletter at https://thedavidjohnsonshow.com.