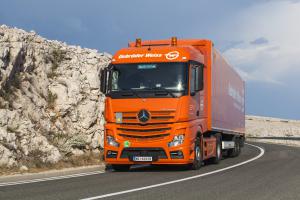 LAUTERACH/MOSCOW, AUSTRIA/RUSSIA, February 28, 2020 /EINPresswire.com/ — The international transport and logistics company now offers its customers land transports to all regions of Russia, securing the delivery of general cargo across the world’s largest country with its new and exclusive partner JDE (Zheldor Ekspeditsiya). The general freight carrier JDE has one of the largest domestic networks in the country with 244 locations in Russia alone.

Established transport routes for an area of some 17 million km²
“Many of our international customers have set up their own production locations in Russia, where they now also have distribution activities. Our cooperation with JDE means that we have a well-established partner on the Russian market who has a strong land transport network and sound logistics expertise, as well as thorough knowledge of the local customs,” says Thomas Moser, Director and Regional Manager Black Sea/CIS at Gebrüder Weiss. The partnership means that JDE’s customers have direct access to the international network of Gebrüder Weiss – and thus to the markets in Central and South-Eastern Europe, as well as those in Central Asia and the USA.

From Kaliningrad to Vladivostok
In view of its enormous size and geographical location, Russia is a key market for Gebrüder Weiss and its customers – particularly with regard to the company’s Silk Road strategy, i.e. expanding Central Asian locations and transport links between China and Europe. Gebrüder Weiss already has its own locations in countries located to the south of Russia, such as Georgia, Armenia, Kazakhstan, Uzbekistan and China. The logistics company has had a presence in Russia since 2013, currently operating three locations, with the service portfolio there including air and sea freight, as well as customs, in addition to land transport by truck and railway.

About Gebrüder Weiss
With more than 7,100 employees, 150 company-owned locations and an annual turnover of 1.67
billion euros (2018), Gebrüder Weiss ranks among Europe's leading transport and logistics
companies. In addition to its core business of land transport, air & sea freight, and logistics, the
company operates a number of highly specialized industry solutions and subsidiaries under the
umbrella of Gebrüder Weiss Holding AG, based in Lauterach (Austria) – including the logistics
consultancy firm x|vise, tectraxx (industry specialist for hi-tech businesses), dicall (communications
solutions, market research, training), Rail Cargo (railway transports), and the Gebrüder Weiss parcel
service GWP, co-shareholder of the Austrian company DPD. This bundling of services allows the
corporate group to respond to customer needs quickly and flexibly. Today, having implemented a
variety of environmental, economic and social initiatives, the family-run company with a 500-year
history is also considered a pioneer in sustainable business practices.

About JDE
JDE was founded in 1995 and today is one of the largest logistics service providers for general cargo
and parcel services in Russia. 244 branches and a network of more than 10,000 parcel distribution
centres provide a high level of coverage throughout Russia. 3,000 employees, 1,500 trucks and 600
railway wagons owned by the company guarantee delivery on time and adapted to the respective
region.