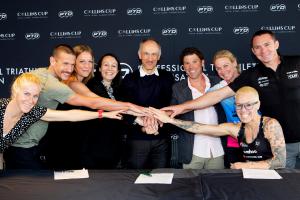 LONDON, GREATER LONDON, UNITED KINGDOM, January 21, 2020 /EINPresswire.com/ — The Professional Triathletes Organisation today announced that it has partnered with Crankstart Investments, an investment vehicle for Michael Moritz, in establishing a platform for professional triathletes to begin to realise their goal of athlete self-determination. As a result of this partnership, the PTO is also announcing that The Collins Cup will be held from 29-30th May 2020 at the x-bionic® sphere, in Samorin, Slovakia, and there will be over $2,000,000 in prize money for the event.

Rachel Joyce, Co-President of the PTO, commented “This day has been long in coming and we are grateful to the great professional triathletes who have, through all their blood and sweat over many years, paved the way for this opportunity to materialise. The Collins Cup will be a true celebration of both the history and the future of the sport we love so much, and we look forward to hosting the event and engaging the entire triathlon community.”

Charles Adamo, Chairman of the PTO, stated that “The PTO has been working for a number of years to create an environment and structure where professional triathletes have a meaningful voice in the way the sport is operated and can contribute to its growth for the benefit of the entire triathlon community. We are very pleased to have teamed up with Crankstart Investments and Michael Moritz, who share our vision in the potential of the sport and the best means by which to see it grow and thrive.”

Under its partnership, the PTO and Crankstart Investments share equally in all profits generated by operations. Michael Moritz, Chairman of Crankstart Investments, commented “The spread of the internet, the rise in the number of media outlets thirsty for top-notch sporting content, combined with the latest production techniques now make it possible to bring to international audiences the extraordinary accomplishments of today’s highest performing athletes – the top forty male and female triathletes in the world. A major part of the attraction of the PTO is that, unlike every other sport, men and women compete for equal prize money and the athletes are co-owners of the business. This means that all participants will share, on an equal footing, in the PTO’s collective success – a recipe that is a mainstay of the Silicon Valley investment model.”

Tim O’Donnell, Co-President of the PTO, commented “We are very pleased to be able to provide professional triathletes with the platform to put on display their tremendous athletic performances and make a difference in our sport. We are grateful for the confidence that Crankstart Investments and Michael Moritz have placed in us, and we appreciate that with this confidence comes great responsibility. As co-owners in this partnership, the PTO and its professional members are committed to not only making it a success, but also to being a contributor to the growth of the sport and the wider triathlon community. While arranging the investment, we were working behind the scenes and over 100 professional triathletes have become members of the PTO, including all of the top 35 men and top 35 women in the PTO World Rankings. Now that we have been able to make this announcement, we can invite all licenced professionals to become PTO Members. There are no costs or membership fees involved and any professional can find out more information by e-mailing us at membership@protriathletes.org.” North Point Advisors has acted as exclusive placement agent for the Professional Triathletes Organisation.

About Crankstart and Michael Moritz
Michael Moritz is Chairman of Crankstart, which has both an investment and a charitable arm. The financing for the PTO comes from Crankstart Investments. Crankstart’s charitable foundation which Michael runs with his wife, Harriet Heyman, provides support to a variety of organizations helping people have a shot at a better tomorrow.
Michael’s primary commitment is as a partner at Sequoia Capital, which he joined in 1986 and where, until 2012, he came to lead Sequoia's adjustment to the profound changes in global technology investing. He was one of the co-founders of its business in China and India as well as Sequoia Global Growth, a global technology fund; Sequoia Heritage, the firm's single pool of globally diversified, long-term assets; and Sequoia Capital Global Equities, a public market fund. Michael has represented Sequoia on the boards of Yahoo!, PayPal, Google, LinkedIn, Flextronics and Kayak; and currently works with a variety of younger businesses such as Instacart, Klarna and Stripe.
Prior to joining Sequoia, Michael co-founded Technologic Partners and was a correspondent for Time, where he was the San Francisco bureau chief. He is the author of several books including The Little Kingdom, the first major book about Apple published in 1984, and more recently LEADING with Sir Alex Ferguson, the long-time Manager of Manchester United. Michael was born in Wales and graduated from Christ Church, Oxford in 1976 with a MA in History. He received a knighthood from the Queen of England in 2013.