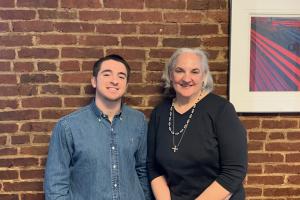 VIZpin recently announced changes to its growing sales team including a promotion and the creation of a new role.

Alex Baider, who joined VIZpin in August 2018 as an inside sales specialist, was promoted to the position of regional sales manager. In his original role, Baider, who graduated from Millersville University in 2018, quickly began growing VIZpin’s business, as well as its certified partner base. In addition, Baider improved sales processes, which resulted in an impressive 30 percent increase in converted leads year over year.

VIZpin Vice President Wendi Grinnell comments, “Alex was a huge asset to the VIZpin sales team as an inside sales specialist. As a regional sales manager, he’ll be responsible for growing our Certified Partner channel, as well as end user customers in one of our mid-Atlantic territories. Judging by his previous achievements, we’re very confident he’ll make a significant impact in his new role, as well.”

In addition, VIZpin recently expanded its sales team by creating the role of account management specialist. Wanda Stoltzfus joined VIZpin in the new role, where she will be responsible for onboarding partners and customers and building customer relationships, focusing on customer adoption and satisfaction. She was formerly the director of development and communications at Court Appointed Special Advocates (CASA) of Lancaster County and a senior project manager at Agilent Technologies.

VIZpin President and CEO Paul Bodell adds, “It’s exciting to see our sales team growing and evolving. With the recent changes to the team and our new partner program that eliminates the annual partner fee and better incentivizes partner sales, we’re looking forward to a very successful 2020.”