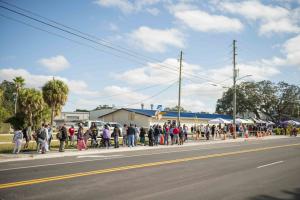 Hundreds line up to receive their Thanksgiving meal from SBT staff and O’Neal Larkin’s volunteers on November 23rd.

“I’ve known O’Neal since he first started doing this. He is a true friend,” said George McBride, who volunteers every year as the DJ. “He asked me to be a part of it and I told him that I had all of this equipment (speakers, mix board and microphones) so we could have music.”

As thousands of people lined-up to be fed, Larkin called up name after name and volunteer after volunteer to the stage that had helped him or the community during the year and gave them an award. Among them were the City Manager, SBT and the Church of Scientology for their continuous support.

“We’ve been involved as a sponsor of the pre-Thanksgiving dinner since O’Neal started it 19 years ago now,” said SBT executive Greg Baker. “Because we are the largest employer in North Greenwood it’s important to be a good neighbor and whenever we see opportunity to help out we jump in and do it.”

Larkin told Freedom he had personally asked SBT to continue the tradition of the annual pre-Thanksgiving dinner, “We immediately said we would take it on,” said Baker. As a tribute to Larkin, SBT will continue to host the event in his name.

Says Larkin: “When I started Thanksgiving I wanted a place where all people—even the blind and disabled—could come without fear and feel the same freedom that Martin Luther King brought to communities.” Starting with 84 people in the year 2000, Larkin says he never thought it would grow to the size it is today.

Larkin’s goal is to continue to bring the community back to its former glory, revitalizing it with respect. “This is a call for unity,” says Larkin, “all organizations, churches and nonprofits should come together and revitalize our communities. It would be my greatest joy.”