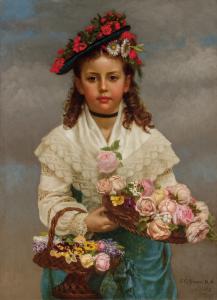 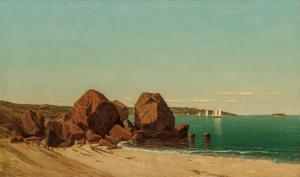 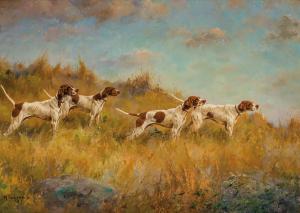 The sale will feature 271 lots of quality fine art, to include American and European works from the 19th century, Impressionism, Modern and Contemporary art.

MILFORD, CT, UNITED STATES, October 10, 2019 /EINPresswire.com/ — Shannon’s next major cataloged auction of Paintings, Drawings, Prints and Sculpture will be held online and in the Milford, Connecticut gallery on Thursday, October 24th at 6 pm Eastern time. The sale will feature 271 lots of quality fine art, to include American and European works from the 19th century, Impressionism, Modern and Contemporary art.

Highlights from the sale include an exceptional Grandma Moses painting Over the Bridge depicting children playing in the winter and riding a sled over a covered bridge. The scene captures all the excitement after a heavy winter snow in Moses’ nostalgic, recognizable style (Estimate $80,000-120,000).

Another highlight in American Art is a sporting scene by Percival Rosseau. The painting is a master work by the artist measuring 23 x 32 inches and depicting four pointers on the hunt. Each dog has unique identifiable markings and is painted in a highly realistic style. The painting is believed to be painted at Overhills, Percy Rockefeller’s hunting grounds in North Carolina (Estimate $60,000-80,000).

Leading the 19th century American Art category is a view of “Half Moon Cove at Gloucester Bay” by James Renwick Brevoort estimated at $50,000-75,000. Brevoort, a second-generation Hudson River School artist, mastered the Luminist techniques of painters like J.F. Kensett, this painting is a rare example of a Hudson River School artist painting in Gloucester. Brevoort was elected to the NAD in 1863. Another view of Gloucester Bay by Brevoort is in the collection of the Los Angeles County Museum of Art (LACMA).

The cover lot is an engaging and beautiful portrait of a young flower girl by J.G. Brown (est. $70,000-100,000). Brown, known for his paintings of children, veered from his usual subject matter of street urchins to paint this upper-class young maiden. She looks directly out at the viewer holding abundant baskets filled with roses, lilacs and pansies. The artist spared no detail, painting her ringlet curls, the flowers, and the elaborate lace collar and sleeves of her blouse with exacting precision.

A sculpture by Abastenia St. Leger Eberle titled “Windy Doorstep” and cast in New York is a rare early example dated 1910. It was exhibited at the National Academy of Design and subsequently purchased by four museums. Eberle worked with Anna Vaughn Hyatt Huntington on early joint commissions and was a contemporary of the Ashcan school in New York.

There are several paintings by New York City and Gloucester artist Theresa Bernstein led by a masterpiece quality composition, The Kindergarten from 1915. The painting measures 40 x 50 inches and is offered at a $60,000-80,000 estimate. It was purchased directly from the artist and is fresh-to-the-market in excellent condition. In 1915, Bernstein was working as a realist artist in New York City. This work was exhibited in “Echoes of New York: Paintings by Theresa Bernstein,” at the Museum of the City of New York (MCNY) in 1991.

Several paintings by British marine artist Montague Dawson will be featured in the catalog led by a dramatic depiction of a race around The Needles– a top sailing destination off the coast of the Isle of Wight in the U.K. The painting, estimated at $80,000-120,000, measures 24 x 36 inches. It depicts three vessels sailing downwind around the lighthouse at the end of The Needles. Another Montague Dawson of the historic “Golden Hind” ship will be offered at $20,000-30,000. Several World War II naval grisaille paintings by Dawson will also be offered.

An online catalog and a digital flipbook for this auction is available on www.shannons.com. Previews will be held daily, starting Monday, October 14th, and continuing through Wednesday, October 23rd (closed Sunday). Preview hours are 11-6 (EDT), except on Saturday, October 19th when the preview will be from 10:00AM-3:00PM. There will also be a preview on Thursday, October 24th, the date of sale, from noon until 5:30PM. The auction will start promptly at 6PM ET. Live, internet, phone and absentee bidding will all be accepted.
Shannon’s produces an extensive color catalog, which is available for sale on their website (shannons.com) or by calling 203.877.1711. A large, 8-page color brochure will be mailed to 18,000+ clients. If you would like to join the Shannon’s mailing list, please email the gallery at info@shannons.com.
Shannon’s Fine Art Auctioneers is always accepting quality consignments for future auctions. The next auction will be an Online Fine Art Auction on January 23, 2020 followed by another cataloged Fine Art Auction in April 2020. To consign a single piece of artwork, an estate or a collection, you may call them at (203) 877-1711; or, e-mail at info@shannons.com. To learn more about Shannon’s Fine Art Auctioneers and the Thursday, October 24th auction, please visit www.shannons.com.
# # # #