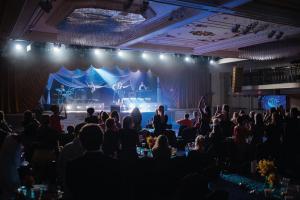 Events like this are a much needed opportunity to create awareness of the influence of drugs in our world. I really see that we must be more proactive about the drugs issue.”
— Educator attending the 2019 Night for a Drug-Free World

CLEARWATER, FLORIDA, UNITED STATES, October 10, 2019 /EINPresswire.com/ — On October 5th the Foundation for a Drug-Free World held its 4th annual “Night for a Drug-Free World” charity concert in the historic Fort Harrison. The concert was a tribute to artists who lost their lives to drugs and also honoring those who are drug-free, clearly showing how artists are more successful drug-free.

The concert featured the Fort Harrison’s “Flag Band” and guest performers Hana-Li, JoAnne Andrews, Erika Ceruti and Michael Graves. It was attended by over 250 guests who enjoyed the complimentary refreshments and great music. The performers ably covered great artists such as: Jimmy Hendricks, Prince, Elvis Presley, Judy Garland, Queen, Led Zeppelin as well as music from The Greatest Showman. This was followed by a dance set, with guests taking to the floor.

An educator who attended the event said, “The singers were very powerful tonight! Events like this are a much needed opportunity to create awareness of the influence of drugs in our world. I really see that we must be more proactive about the drugs issue.”

A guest, who works in the community said, “This was such a great concert! I danced throughout the whole show. I loved how they paid tribute to artists I admire. Drugs are so tightly connected to that industry. We sometimes forget there is a way out and that others simply don’t have to fall into that trap.”

As guests left the concert they took complimentary Truth About Drugs booklets and DVDs providing facts on drugs. The materials are part of the international “Truth About Drugs” educational campaign. All the proceeds raised from the concert benefit the Foundation for a Drug-Free World and will be used to spread the Truth About Drugs program to at-risk youth, educators, law enforcement personnel and community leaders throughout the state of Florida.

President of The Foundation of a Drug-Free World’s Florida Chapter, Julieta Santagostino, stated: “We strive to ensure people are well armed with the true facts about drugs, so they can make the right choices and help their community.”

About Foundation for a Drug-Free World:

Foundation for a Drug-Free World is a non-profit, public benefit organization. The Foundation for a Drug-Free World provides educational materials, advice and coordination working with youth, parents, educators, volunteer organizations, and government agencies —anyone with an interest in helping people get the information they need to avoid drug abuse and addiction. The Truth About Drugs campaign booklets, in 22 languages, have reached millions of people all over the world. For more info go to www.drugfreeworld.org

About The Fort Harrison:

The Fort Harrison serves as the international religious retreat for the Church of Scientology. With more than 11,000 Scientology Churches, Missions and groups spanning six continents, Scientologists come to Clearwater from all over the world for religious training and ministerial services. The Fort Harrison is made available to community groups and charities for their special events and fundraisers. Scientology is an applied religious philosophy based on the work of L. Ron Hubbard.